Sylvatiins, a new group of tannins was found from the petals of Geranium sylvaticum. These compounds may have a significant role in flower color manifestation via a co-pigmentation effect. 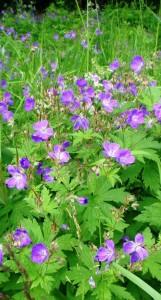 Geranium sylvaticum (i.e. wood cranesbill) is a common plant in Finland and grows wild in most parts of Europe. It is a perennial herb which flower color varies from white to deep purple. This plant is very rich in tannins, both proanthocyanidins and hydrolysable tannins, and other phenolic constituents which content and type vary significantly in different organs. Leaves contain considerably high content (13% of dry weight) of ellagitannin, geraniin. Proanthocyanidins are more abundant in the roots and seeds of this plant.

Petals accumulate a unique group of phenolic compounds that were not found in the other plant parts. In the recently published paper by researcher Anu Tuominen in the Phytochemistry journal, four of these compounds were isolated and their structures were characterized. It was found that these compounds compose a totally new group of hydrolysable tannins that contain additional acetylglucose moiety attached to the galloyl groups of galloyl glucoses and chebulinic acid. These new compounds were named as sylvatiins based on the Latin name of the species. “To our knowledge, these kinds of hydrolysable tannin glycosides have not been found before from other plants”, Tuominen states.

The potential role of sylvatiins in the color manifestation of petals

The beautiful purple color of G. sylvaticum petals that attract pollinators is produced by anthocyanin pigments. The main anthocyanin in the G. sylvaticum petals interestingly contains the same acetylglucose moiety as sylvatiins.  “The occurrence of sylvatiins only in petals, and their structures that contained the same sugar part that anthocyanins, gave us the idea that maybe sylvatiins might also have a role in the color manifestation of flowers”, Tuominen describes.

The petals of G. sylvaticum are often heavily consumed by herbivores. Typically the ecological role of tannins is thought to be as defensive compounds against plant eating herbivores or plant diseases. The potential of sylvatiins to act as defensive compounds was evaluated using the protein precipitation capacity assay. The result was that the acetylglucose group decreased the protein precipitation capacity of galloylglucoses. However, the benefit from the additional acetylglucose group may be better water-solubility, so that higher concentrations of sylvatiins can be accumulated to the vacuole cell sap.

Can hydrolysable tannins act as co-pigments?

The color of anthocyanins is dependent on the pH conditions. The usual pH of petal vacuoles is such that anthocyanins are almost colorless without the presence of other compounds that act as co-pigments. The co-pigment stabilizes anthocyanin structure and intensifies its color. In general, flavonol glycosides are good co-pigments and the most of the research has focused on them. Hydrolysable tannins are less studied as co-pigments.

Researcher Tuominen concludes that G. sylvaticum petal cells may accumulate sylvatiins for intermolecular co-pigmentation purposes. This result gives a new view to the function of hydrolysable tannins, which could after small modifications also act as co-pigments.

“The occurrence of sylvatiins only in petals, and their structures that contained the same sugar part that anthocyanins, gave us the idea that maybe sylvatiins might also have a role in the color manifestation of flowers”, Tuominen describes.