Typically the defense chemistry is very species-specific, but some of the details may vary especially with the tissue type and the growth stage of the plants so that tree seedlings should be avoided in experiments if possible

Plant tissues may share the same chemistry – or not 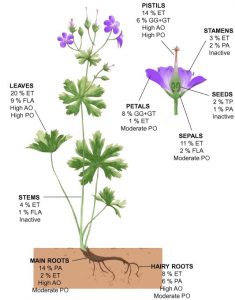 Figure 1. Tuominen et al. (2013) and Tuominen (2013) investigated the distribution of polyphenolic defenses in the organs of Geranium sylvaticum and found out a huge variation in defenses of the different tissue types.

It is not enough that plant species differ in their defensive chemistry. There are surprisingly many factors that cause differences within one species as well. It is also in a way surprising how species differ in the within species differences. For instance, where one species produces very similar defensive chemistry into all plant tissues, another species produces very different defenses in all tissues. There is no way to know this without doing the chemistry first, but of course one may assume that if all plant tissues have different external stress factors, then the tissues may be forced to produce variable chemical defenses (Fig. 1). With just one type of external stress, perhaps one type of defense chemistry is sufficient. Naïve thinking, but perhaps this is true.

Tissue-specific changes are most often quantitative, not qualitative

The most common interest for looking at the within species differences is linked to the effects of soil, temperature, solar radiation and other environmental factors on the defense chemistry. In most cases these types of changes are quantitative, not qualitative. It is typically found that increased UV-B radiation tends to increase foliar flavonoid levels, but new types of flavonoids are not necessarily found, unless some flavonoids were below the detection limits before their induction.

Resources may affect the defensive chemistry as well – the traditional view

Figure 2. Tuominen & Salminen (2017) studied the ontogenic variation in the defense chemistry of Geranium sylvaticum flowers and found moderate variation in concentrations, but not in the qualitative composition.

Similarly it is thought that increased levels of fertilization switch plants into the growth mode while their defense mode is relaxed, especially in the absence of herbivores. The opposite is expected when resources for growth are scarce, i.e. poorly growing tissue needs to be better defended. All this makes sense and some of these types of resource allocation issues are behind the patterns of defense chemistry we observe in nature.

From tiny differences to larger ones – forgetting the resource aspects

However, the following sections that focus on within species variation in defense chemistry have nothing to do with resources available via the soil and very little with the resources available from the sun either. These differences have to do with different types of external stress factors, variable levels of the key enzymes, different maturity stages of leaves within the foliage and the most dramatic effects do come from seedling to mature tree comparisons. When all these factors are controlled, the variation in the species chemistry is typically so well controlled that a single phytochemical analysis of the foliage is enough for a phytochemist to say which species he/she is dealing with. Of course one should give him/her some justice if he/she makes a mistake between two close relatives within the same genus. The patterns discussed in the following sections are: Life Stage Differences, Individual-to-Individual Differences, Differences Between Plant Parts, and Differences Within the Leaf Crown.

“Yes, you need to collect those tissue types separately – unfortunately.”