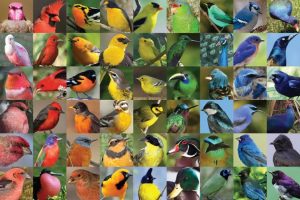 If one is interested in the chemical ecology of plants and insects, then the interest easily continues towards birds as well. Birds are naturally one of the most significant predators of insects and thus the sequestered metabolites in insects are often directed to repel birds from feeding on them. In some cases these insect defenses are effective at larval stages only, while other species rely on effective defenses to be found in adults as well. The defenses may also be modified between larvae and emerging butterflies, meaning that birds need to be able to learn which species and life forms they can feed on, without being harmed e.g. by alkaloids present in the wings of adult butterflies.

Birds gain a major part of their feather colors from their daily diet, while some specific colors are a result of light refraction caused by the physical structure of the feather. Typical examples of dietary colorations are the pink-colored flamingos and the yellow-colored great tits. Our efforts at the Natural Chemistry Research Group have focused mainly on the great tit (Parus major), since that has been the major model species for Dr. Tapio Eeva, who is one of the leading bird scientists in Finland.

It is quite intriguing to find out that the feather coloring of the great tit is affected by its daily diet that is affected e.g. by environmental pollution such as heavy metals emitted by local mining industry. At the same time these coloration pigments are transferred even to the plasma of the birds and further to the egg yolk. What is really puzzling is the variable metabolism of color pigments in both insects and birds, since that directly defines the feather coloration. Why some of the carotenoids are fully depleted during the food chain, while others stay stable and finally cause the coloration we witness with the great tits? There are still questions that we cannot answer at this stage.