Hydrolysable tannins accumulate almost invariably in young plant tissue, but there are differences in the patterns of individual compounds, since the end products of the ET pathway may accumulate even in the autumn

The biosynthesis of hydrolysable tannins is known until tellimagrandin II

The biosynthesis of hydrolysable tannins has been revealed all the way from 1-O-galloylglucose to the first ellagitannin of the pathway, i.e. tellimagrandin II, thanks to the work of professor emeritus Georg Gross and his team. All the steps from tellimagrandin II onwards have been deduced by using the structural similarities between the ellagitannin structures and by comparing their seasonal variation in the plant cell. The latter approach lacks the specificity of enzyme studies, but in the lack of enzyme studies that will just have to do.

We revealed gallic acid biosynthesis and looked at ellagitannins as well

We at the Natural Chemistry Research Group have revealed the biosynthetic origin of gallic acid (Ossipov et al. 2003) that had been the enigma of hydrolysable tannin synthesis for a long time. Before that in 2001, we were able to use the seasonal variation of several monomeric glucopyranose-based hydrolysable tannins in the leaves of Betula pubescens to reveal their most probable biosynthetic linkages. In 2004 we used the same approach with the foliage of Quercus robur that contained similar monomers to B. pubescens, but in addition produced monomeric C-glycosidic ellagitannins together with one rare dimer, the cocciferin D2. 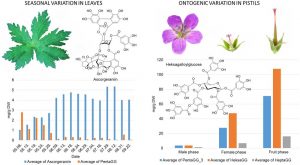 The above studies and other unpublished experiments we have done over the years, made it quite clear what are the typical seasonal patterns of hydrolysable tannins in tree foliage. Most typically, highest levels of hydrolysable tannins are found in very young leaves. If the plant is able to accumulate galloylglucoses, then these are the first ones to show declines in their concentrations. However, galloylglucoses are not found in all plants, even though they need to be produced as biosynthetic predecessors of ellagitannins. This is due to high turnover rates of galloylglucoses to tellimagrandin II and further to other HHDP-esters.

After the rapid decline of galloylglucoses, there may be an accumulation of certain glucopyranose-based ellagitannins as happened in birch leaves, or quite rapid general decline in ellagitannin levels as well as happened in oak leaves. Both cases were different in the details of the seasonal variation of individual ellagitannins, but they supported our view of ET biosynthesis that is also supported by the Japanese ellagitannin chemists. Similar seasonal patterns were recently observed also for Geranium sylvaticum by Tuominen & Salminen (2017), who also showed that ontogeny may be a major player in shifting the metabolite concentrations (Fig. 1).

In some specific cases, like with mountain birch leaves and flowers of the evening primrose, we have witnessed the true accumulation of 1-O-galloylglucose. By this we mean that this primary source of galloyl groups to all other hydrolysable tannins has been found as one of the major compounds in these tissues. This is very rare, since in most plants that synthesize high levels of hydrolysable tannins, this compound cannot increase in concentration as it is so efficiently used in the production of other hydrolysable tannins. The same is true with gallic acid, which does not accumulate in plants, since it is efficiently used in the production of 1-O-galloylglucose.

It is often forgotten that tannins may participate in the strengthening of plant cell walls by turning into cell-wall bound forms as plant tissue matures. It is not exactly known which of the ellagitannins or proanthocyanidins participate in this process, but both are found in insoluble, cell-wall bound forms. Since they are released from the plant tissue only by harsh acid-catalyzed depolymerizarion or hydrolysis reactions, the original bound forms of the compounds cannot be known.

“These patterns are as expected – but these are new. Wow!”